After a memorable first event at St James The Great, Church Of Sound was very excited to welcome another crew of young & talented heads into St James the Great, this time in the form of Moses Boyd’s Exodus, who would be exploring the music of Art Blakey alongside their own original material.

Drummer, composer, producer and label owner and at the time just 24 years old, the London born musician had just won act of the year at Jazz Fm Awards, the John Peel Award at Gilles Peterson’s Wordwide Awards and the MOBO Awards 2015 for Best Jazz Act.

In the immediate aftermath of his Steve Reid InNOVAtion Award, Moses had begun working and collaborating with the likes of Lonnie Liston Smith, Four Tet, Floating Points, Zara McFarlane, Gilles Peterson, Soweto Kinch and many more, whilst leading his own outfits The Exodus and Solo X. As you can probably tell, this was a seriously busy time for him & we were lucky to have him and the full Exodus play with us.

It was June 2016 & Moses’ first 12” was released just months before, which featured the now seminal dancefloor jazz number ‘Rye Lane Shuffle’. I remember flyering in the queue to Village Underground a night or two in advance of this gig and being surprised at just how many people recognised the name Moses Boyd. The good news was beginning to spread!

As for the music itself, it was a spellbinding night. Particular standouts in the memory include a raucous cover of Cameo’s Candy & a particularly hushed solo from Moses himself, bringing the Church to a standstill (this moment can still be found on YouTube for the intrepid). The band remained faithful to Art Blakey’s many visions, although frequent diversions in arrangement came courtesy of Nathaniel Cross’s bountiful invention. It was with the second set that the band really began to transcend – as Binker’s saxophone directed sheaths of sound upwards towards the ceiling, Theon’s now ubiquitous tuba began to rattle the crypt & space was left in the middle distance for Moses’ drums to sing.

This was also the first appearance of Vera: a wonderful lady & near-mythic presence at St James the Great, she can be found with some regularity inhabiting her specially cushioned seat next to the bar, bending the ear of anyone who’ll listen. 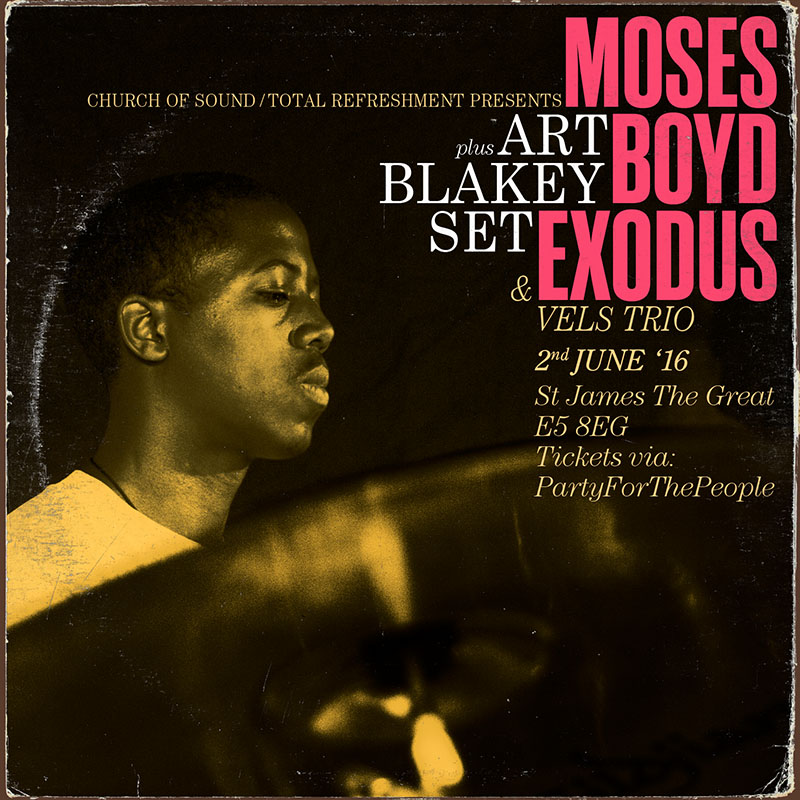 Following on from the Yussef Kamaal Trio’s stellar performance of the Idris Muhammed Songbook, Church of Sound are back with a night that’s bound to be just as special.

Art Blakey’s work both as a band leader, with The Jazz Messengers, and in collaborations with some of the greatest names in jazz amounts to some of the most celebrated bebop and hard-bop. The influence of Blakey’s work spans decades of music and continues to do so, with some incredible new jazzcats taking the scene by storm…

VF Mix 48 traces the work of Art Blakey and others.

The mix has been put together to mark the forthcoming Moses Boyd show in East London, which sees the young drummer cover songs from the Art Blakey songbook. At just 24-years old, Boyd is one of the most striking jazz voices we’ve heard in some time. He just released his first 12″ featuring the absolutely electric afro-jazz explosion that is ‘Rye Lane Shuffle’ – a tantalising taste of what to expect from his forthcoming debut album, which has been mixed down by Four Tet & Floating Points…

With an impressive first event led by Yussef Kamaal, Church Of Sound are returning to the stunning settings of St James The Great with an appearance from musical polymath Moses Boyd. He’ll be joined by his quartet to perform the Exodus album, along with a tribute to legendary bebop drummer Art Blakey.

Boyd has already been awarded the title of Best Jazz Act at the 2015 MOBOs, Act of the Year at the Jazz Fm Awards and the John Peel Award at Gilles Peterson’s Worldwide Awards. He recently dropped the infectious dancefloor jazz of Rye Lane Shuffle on his own Exodus Records…